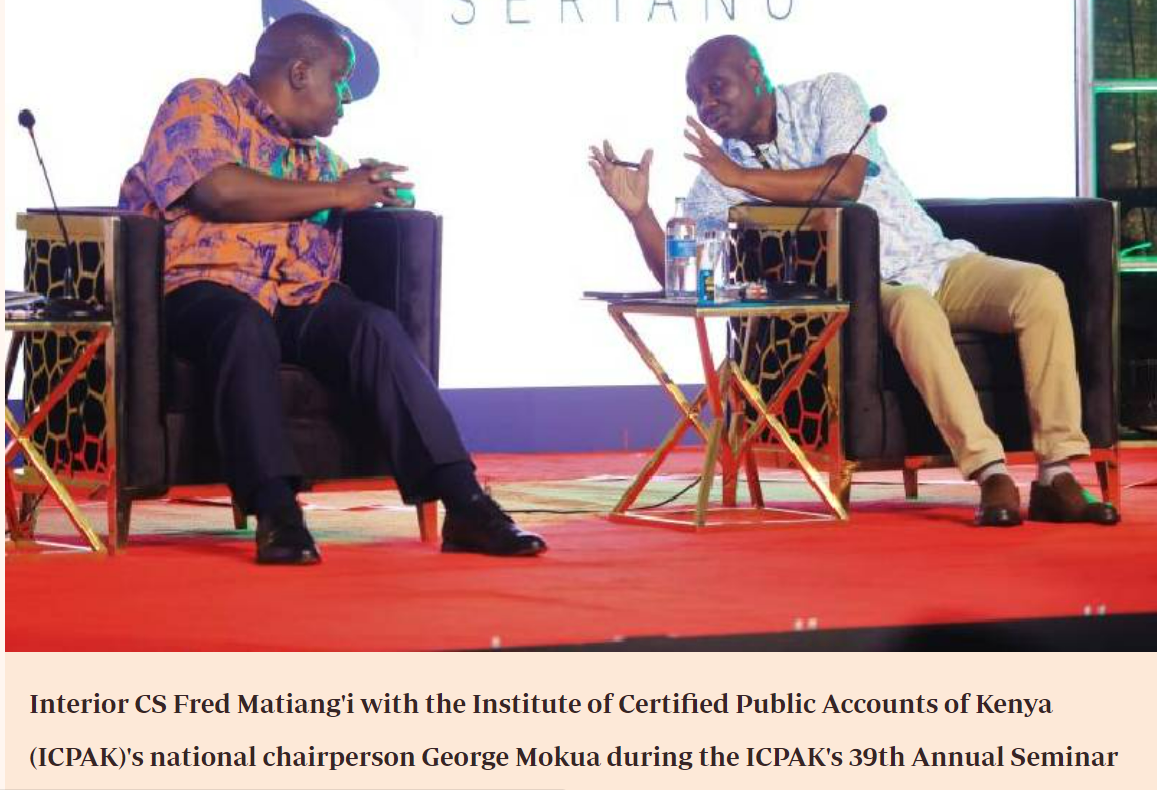 The Institute of Certified Public Accountants of Kenya (ICPAK) wants the government to cap the price of food commodities and stop further increases in fuel pump prices to cushion consumers.

Since the beginning of this year, the accountants said, the soaring cost of food and fuel has been a major driver of overall inflation.

“We urge the government to intervene and set a food and fuel price ceiling for the remaining part of the year to cushion citizens from the cost-push inflation,” said ICPAK Chairman George Mokua during ICPAK’s 39th annual seminar in Mombasa on Tuesday.

The government introduced price controls on fuel in 2010, with the industry regulator capping the maximum oil marketers can charge every month, but this has not helped to cushion consumers against price increases.

The government, however, did away with price controls in the 90s, although there has been a clamour for the reintroduction of the practice amid unprecedented increases in the price of basic commodities over the years.

Mr Mokua said the continued increase in the prices of basic commodities occasioned by, among other factors, volatility in international oil prices given the ongoing Russia-Ukraine conflict, supply chain disruptions in the energy sector and increased prices of agricultural inputs poses a major threat to the economy.

The accountants urged the National Assembly and Treasury to employ sector-targeted tax exemptions on agriculture and energy.

“As the National Assembly deliberates on the Finance Bill, we urge it and the National Treasury to employ sector targeted tax exemptions focusing on the agricultural and energy sectors to mitigate against inflation,” said Mr Mokua.

He said there is a need for increased revenue mobilisation, sustainable growth, and reduced compliance costs while ensuring that the tax system is fair and equitable.

“Fairness considerations include the relative taxation of the poor and the rich, corporate and individual taxpayers, cities and rural areas, formal and informal sectors, labour and investment income and the older and the younger generations,” said Mr Mokua.

He said as the government expands the tax base, gradual reduction of tax rates and even redistribution of tax bands is necessary to ease the tax burden and increase collection.

The lobby boss said reduced rates would increase the disposable income of both individuals and corporations, which would be saved for investment or consumption.

This will, in turn, spur economic growth.

Mr Mokua said a proposal to amend the Tax Appeals Tribunal Act, 2013 requiring a deposit of 50 per cent of the disputed tax revenue in a special account at the Central Bank of Kenya pending hearing by the tribunal, requires further stakeholder engagement.

He noted that the proposal is bound to have far-reaching consequences as it may affect the cash flow of businesses but not cure delays associated with the resolution of tax disputes, including timely refunds.

“We urge the National Treasury to benchmark the dispute resolution process with the UK and US who have entrenched specific timelines on the resolution of tax disputes,” said Mr Mokua.