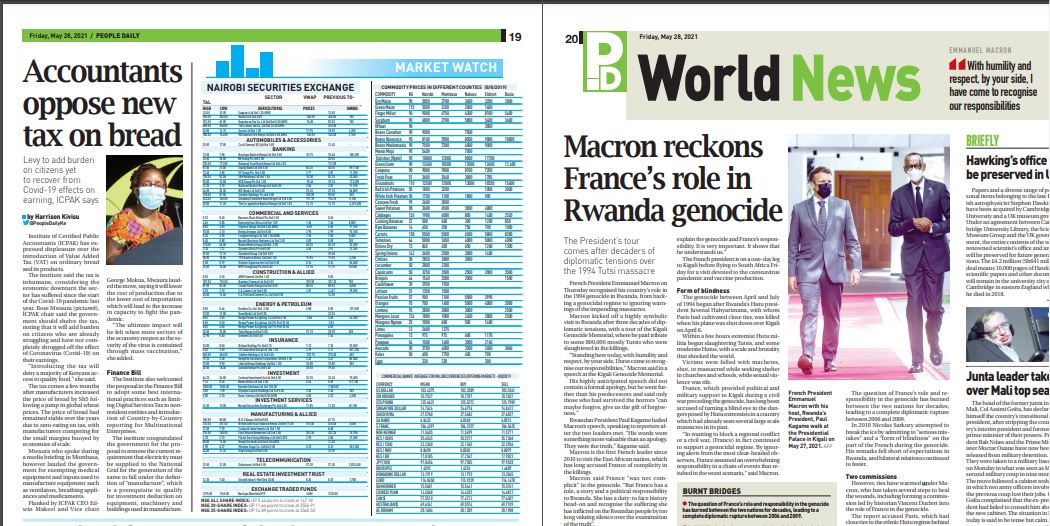 Levy to add burden on citizens yet to recover from Covid-19 effects on earning, ICPAK says

Institute of Certified Public Accountants (ICPAK) has expressed displeasure over the introduction of Value Added Tax (VAT) on ordinary bread and its products.

The institute said the tax is inhumane, considering the economic downturn the sector has suffered since the start
of the Covid-19 pandemic last year. Rose Mwaura (pictured), ICPAK chair said the government should shelve the tax, noting that it will add burden on citizens who are already struggling and have not completely shrugged off the effect of Coronavirus (Covid-19) on their earnings.

“Introducing the tax will deny a majority of Kenyans access to quality food,” she said.

Mwaura who spoke during a media briefing in Mombasa, however lauded the government for exempting medical equipment and inputs used to manufacture equipment such as ventilators, breathing appliances and medicaments.

Flanked by ICPAK CEO Edwin Makori and Vice chair George Mokua, Mwaura lauded the move, saying it will lower
the cost of production due to the lower cost of importation which will lead to the increase in capacity to fight the pandemic.
“The ultimate impact will be felt when more sectors of the economy reopen as the severity of the virus is contained
through mass vaccination,” she added.

Finance Bill
The Institute also welcomed the proposal in the Finance Bill to adopt some best international practices such as limiting Digital Services Tax to nonresident entities and introduction of Country-by-Country reporting for Multinational Enterprises.

The institute congratulated the government for the proposal to remove the current requirement that electricity must be supplied to the National Grid for the generation of the same to fall under the definition of “manufacture”, which is a prerequisite to qualify for investment deduction on equipment, machinery and buildings used in manufacture