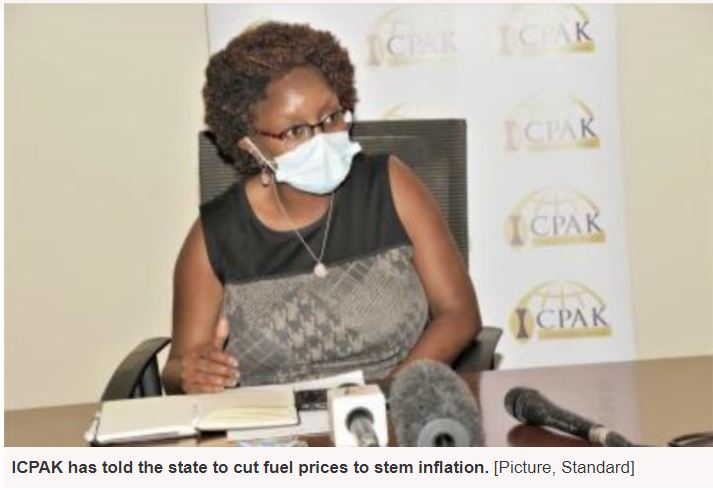 Accountants have asked the government to reduce fuel prices, which have put a strain on Kenyans amid the Covid-19 pandemic.

The Institute of Certified Public Accountants of Kenya (Icpak) said the increase in prices has been the highest since 2007, jumping by Sh15.82 in two months and leading to high inflation.

“This means that Kenyans will endure more pain amid a pandemic. We all know that the costs of energy and transport have significant weight in the basket of goods and services that is used to measure inflation in the country,” said Icpak Chairperson Rose Mwaura.

The inflation rate rose marginally to 5.8 per cent in February from 5.7 per cent in January, which was largely driven by cheap fuel and food prices.

“Petrol prices have jumped by Sh15.82 over the past two months, making it one of the biggest jumps over the period since 2007,” said Ms Mwaura.

She said 2021 has been characterised by several major and far-reaching tax changes in Kenya including a minimum tax of one per cent of gross turnover for small businesses and a digital services tax at the rate of 1.5 per cent of the transaction value.

“To add pain to injury, mid this month the Energy and Petroleum Regulatory Authority, which is mandated to announce monthly fuel price reviews, sent a shock down the spine when it announced a sharp increase in the price of fuel,” she said.

The chairperson said producers of goods and services are also expected to factor in the higher cost of petroleum, unleashing pricing pressure across the economy with ramifications on the cost of living.