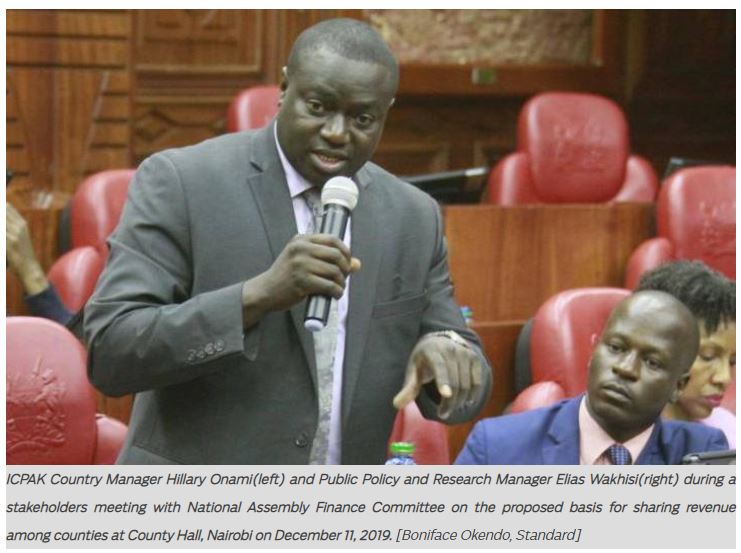 Counties that do not get a clean bill of health from the Auditor General should be penalised by reducing their funds’ allocation every financial year.

This is according to a proposal by the Institute of Certified Public Accountants of Kenya (Icpak).The institute was making a presentation yesterday to the Senate Finance and Budget Committee on the proposed formula for the allocation of funds to counties.In the formula that will be applied until the year ending June 2024, the Commission on Revenue Allocation (CRA) factors in financial prudence among the considerations that Treasury should make in deciding how much a county receives.

Financial prudence has an assigned weight of two per cent, but Icpak said it should have a weight of 15 per cent, which would push governors to be more responsible when handling public money.The body said counties that do not get an unqualified opinion should miss out on the funds allocated using these criteria.If CRA adopted such a proposal, only two counties – Makueni and Nyandarua, which got unqualified opinions – would get the full allocations.

“On audit reports, we note qualified opinion has been assigned a score of two, yet this is a type of a modified opinion. It means that the Auditor General was unsatisfied with the veracity of certain expenditure,” said Icpak Public Policy and Research Manager Elias Wakhisi.A qualified opinion is given by an auditor in the absence of financial records or where there is insufficient co-operation from an institution’s management.

“This should not be rewarded,” said Mr Wakhisi.Icpak also proposed modalities that would force counties to reduce their expenditure on salaries, which accounts for the bulk of recurrent budgets.It notes that the country should adopt international standards where only 40 per cent of recurrent expenditure should go to paying salaries.“We propose that county governments should seek to curb their direct personnel costs to the internationally accepted benchmark of 40 per cent,” said the institute.“The proposal will mean counties whose personnel costs are below the 40 per cent threshold should be allocated 100 per cent of the funds available under this parameter.”