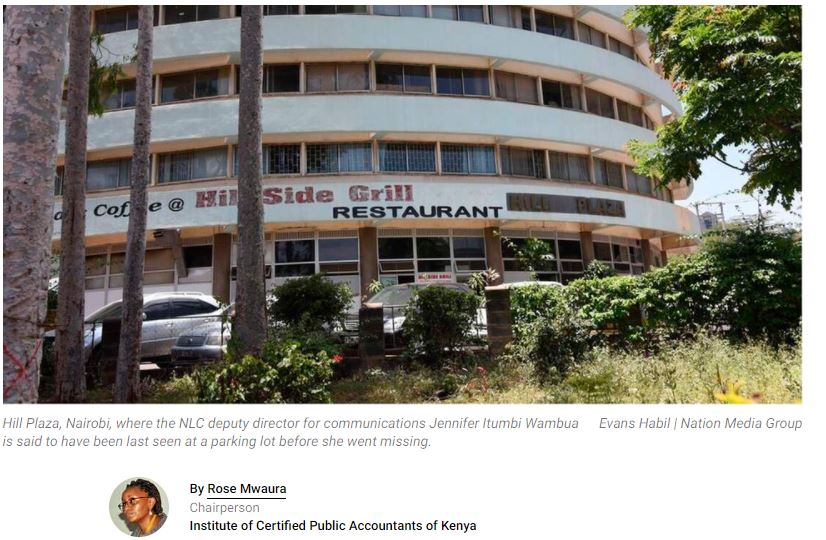 What you need to know:

The murder of Jennifer Wambua, the National Land Commission (NLC) deputy director of communications and journalist, who reportedly went missing on March 12 only for her body to be found later, highlights the mortal danger that whistleblowers and state prosecution witnesses face in Kenya and globally.

Corruption is the biggest scourge and risk that Kenya faces. In 2019, the country ranked 137 out of 180 countries on Transparency International’s corruption perception index. Its score stands at 28 out of 100 — indicating high levels of public sector corruption.

Corruption diverts resources from the needy and prevents the delivery of essential services to the citizens. It jeopardises the development agenda — including the delivery of key national initiatives such as healthcare, education, housing and agriculture.

We have also been told that, in Kenya, we lose one-third of the annual budget and up to Sh2 billion daily to corruption. This simply means that corruption is big business in Kenya.

Which, in turn, means that anybody who stands in the way of corruption or decides to become a whistleblower or state witness will be dealt with ruthlessly by the corruption machinery.

Media reports say Wambua had given testimony in a case in which current and former high-ranking government officers are charged together with others of conspiring to defraud the government. She was to return to court for more appearances.

While her death has not been concretely linked to the case, it’s also not clear whether Wambua was in a witness protection programme that should have kept her identity secret and had testimony taken in camera. But clearly, the state failed to protect her.

Media further report that she had pleaded with journalists at an earlier court session at which she testified not to report what she had said in court. This could mean that she was afraid of being identified and targeted.

There is a need for a strong whistleblowing safety and effectiveness protocols and protection systems designed specifically to protect whistleblowers and prosecution witnesses in corruption cases.

It has become increasingly clear that the effectiveness of the Office of the Directorate of Public Prosecutions (ODPP), Judiciary and other national investigative authorities in investigating and obtaining convictions on corruption is wanting.

In the absence of a strong legal framework, dire consequences have befallen those who have attempted to blow the whistle on graft or turn state witness. Government and corporate employees who report wrongdoing to their managers or regulators have faced dismissal, harassment and other forms of retribution.

Some have ended up losing their lives or voluntarily or involuntarily leaving their jobs. Many others have suffered through hardships such as long-term unemployment, financial instability, anxiety, alcoholism, social isolation, violence and or discrimination, marital problems among others.

One clear way in which the government can demonstrate its commitment to fighting corruption is through accelerating the approval and enactment of the Whistleblowers Protection Act, which has languished in Parliament since 2014 with little traction except for a new version being introduced in 2019.

With the law, the government can put in place legal protection mechanisms to insulate gallant, patriotic, and specifically professionals, who refuse to be mired in fraud and professional malpractices and speak out or become state prosecution witnesses.

In the meantime, the Witness Protection Agency should ensure the safety of whistleblowers and prosecution witnesses to give confidence in the fight against corruption.

Ms Mwaura is the chairperson of the Institute of Certified Public Accountants of Kenya.