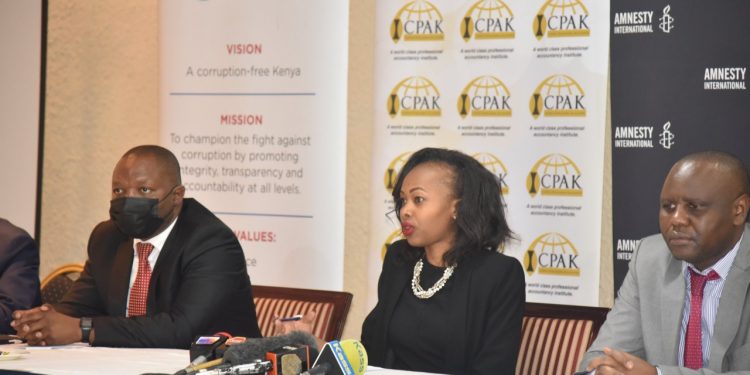 A lobby group has called on the Directorate of Criminal Investigation to probe the dismissal of Maasai Mara University Certified Public Accountant(CPA) Spencer Sankale.

This comes days after Sankale was fired by the University council over what they termed as gross misconduct.

“Having studied the legal case against the former Vice Chancellor and others before the court and timeline of incidents leading to this dismissal, ICPAK, TIKenya and Amnesty condemn the dismissal of CPA Spencer Sankale,” they said.

According to the group, his treatment by Maasai Mara University administration and Council following expose of corruption ‘Mara Heist’ at the University in 2019 is alarming.

The group said they have evidence and testimony that implicate the current administration in two redeployments and pressure for him to expunge sections of an internal audit that implicates the current Acting VC and some members of the council.

Additionally, they said that this action is inconsistent with an attempt to rescue the University from the concerns exposed in the ‘Mara Heist’.

“This action by the Maasai Mara University Council, Acting VC and University Management continues the process of intimidation and interference of key state witness in the ongoing ‘Mara Heist’ case before the high court,” they said.

They have called on the University to immediately and unconditionally reinstate Sankale, failure to which they shall fully support him in seeking legal protection in a court of law.

Dismissal of Sankale without a fair administration hearing is an attempt to interfere with a State witness in the ongoing ‘Mara Heist’ legal case. It is worrying that this is happening as a draft internal audit indicates fresh allegations of corruption and mismanagement of public funds by the University Council members and management,” they averred.

They called on the Education Ministry to probe further, and if allegations are true, strongly consider disbanding the University Council based on their incompetence in the implementation of their oversight mandate.

Further, they called on the Inspector General of Police Hillary Mutyambai to give extra protection to the witnesses and whistle blowers in matters such as these.

Spencer’s appearance before the University Council last September, as well as two other meetings, led the body to conclude that he had continued with what it called “gross misconduct.”

‘Sustained insolence to the employer, cyberbullying, malicious representation, libel, defamation, and falsely maligning the image and reputation of the University,’ according to the council, were among the nine offenses cited to justify its decision to summarily terminate Spencer’s employment.

In a press conference yesterday, the Union’s chairperson, Dr. Phillip Onyango, described his dismissal as illegal and unfair, demanding that he be reinstated and the entire University Council disbanded.

“On the unfair dismissal of Sankale, we demand of his reinstatement and the University council be disbanded,” the Union said.