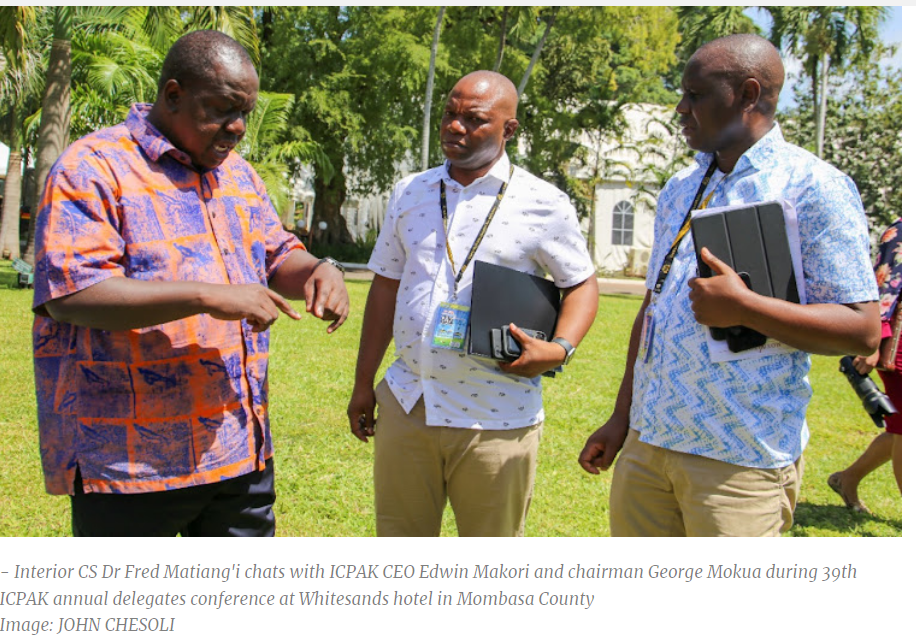 Interior Cabinet Secretary Fred Matinag’i says there has been an unprecedented rise in the number of corruption cases implicating accountants.

He said the problem cuts across the public and private sectors and this risks eroding the credibility of the Institute of Certified Public Accountants (Icpak) which regulates and licenses accountants.

He said despite Icpak should be maintaining a disciplinary register to try and hold its members accountable, it is yet to resolve sixteen graft cases involving its members.

“You will note that eight of the sixteen cases have been pending for the last five years, six cases for four years, one case for six years, and another one case for two years,” said Matiangi.

He said Icpak’s data shows that twelve (12) cases are now categorised as dormant – meaning no action is likely to be taken.

“The delay in resolving these cases undermines Icpak’s reputation and erodes public confidence. I wish to reiterate the need to immediately resolve these disciplinary cases,” said Matangi.

The CS said accountants should observe the ethical guidelines and applicable standards while discharging their duties.

“I wish to remind you that these rules take precedence over any instructions from a client or other person,” he said.

He said in July 2022, the Ethics and Anti-Corruption Commission (EACC) succeeded in upholding charges against four principal accountants as accomplices in the irregular payment of Sh68 million to a law firm by the Nairobi City County (2013-2017).

In March last year, Justice Mumbi Ngugi of the High Court established that a former Chief Accountant had used his position to acquire unexplained assets around the time of the Anglo Leasing contracts.

In a separate case, an Anti-Corruption Court at Milimani in Nairobi jailed three accountants from the Ministry of Higher Education for defrauding the ministry through irregular withdrawals of public funds between 2008 and 2010.

“Surely, it should be of grave concern to those of us in the accountancy profession that more than 14 percent of the Sh5.5 billion loss resulted from accounting and financial statement fraud,” said Matiangi.

He said the national government has in the last 10 years strengthened the legal and regulatory framework in which accountancy in the the public sector can thrive.

Matiang’i said these include laws and regulations such as the Public Audit Act, 2015, The Bribery Act 2016, and the amended Public Procurement and Assets Disposal Act, 2015.

Others are the Proceeds of Crime and Anti-Money Laundering Act of 2009, the Ethics and Anti-Corruption Commission Act no. 22 of 2011, the Public Officer Ethics Act, 2003, and the Anti-Corruption and Economic Crimes Act, No. 3 of 2003, and other laws to enhance the fight against corruption.

“Despite all these efforts, regrettably, we continue to register numerous cases across the public sector where accountants fail to detect fraudulent transactions,” he said.

He said there is a lack of diligence in the use of the Integrated Financial Management Information System (IFMIS), leading to the loss of public funds.

Between 2018 and 2021, Matiang’i said, data from the Financial Reporting Centre (FRC) showed that the agency conducted investigations of suspicious proceeds of crime amounting to Sh374 billion.

The cases have been reported and forwarded for further investigations and possible prosecution to law enforcement agencies.

The FRC has forwarded to Ethics and Anti-Corruption Commission (EACC) about 90 cases, Kenya Revenue Authority (KRA) 89 cases, and to Assets Recovery Authority 102 cases.

Some 171 cases have been forwarded to National Intelligence Service, and DCI is handling some 154 cases.

“These cases are linked to corruption, tax evasion, money laundering, and financial fraud,” he said.