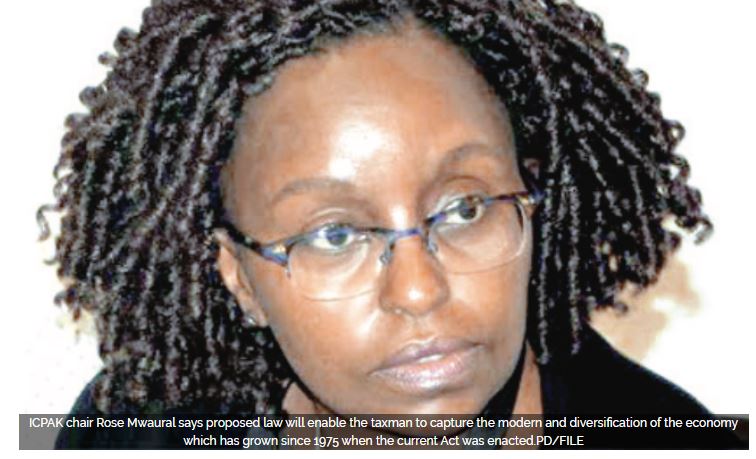 The Institute of Certified Public Accountants of Kenya (ICPAK) has raised concern over the delayed enactment of the Income Tax Bill, 2018, which seeks to broaden the income tax net, simplify the income tax law and foster high tax compliance.

Chairperson of the institute Rose Mwaura said once enacted, the bill which has been pending for two years, will overhaul the current Income Tax Act, which has various provisions, which are obsolete and misaligned with global markets.

“The institute proposes that tabling of the bill to Parliament be expedited and initiatives commenced to finalise an overarching tax policy for Kenya,” she said.

Mwaura spoke before the Senate Committee on Finance and Budget chaired by Isaac Mwaura. She said enacting the bill would enable the taxman to capture the modern and diversification of the economy which has grown since 1975 when the current Act was enacted.

Measures contained in the bill intend to boost tax collection, particularly from the informal sector and high-income earners resulting in increased revenue for the government.

The bill published by National Treasury on May 14, 2018 also seeks alignment with the Constitution and attendant laws that require modernisation of income tax.

On food security, the umbrella body for the accountancy profession said the agriculture sector had faced numerous challenges, lowering productivity in recent years.

However, the stagnation in productivity had been largely due to frequent drought in parts of the country, high costs of domestic food production due to the high costs of inputs especially fertiliser and farming equipment.

Mwaura said there was need to build and improve rural infrastructure to open space for movement of goods and services, revisit policies on trade agreements to boost the export of some agricultural products and improve access to financial services and credit for agriculture and rural development.

She said since Kenya still relies heavily on rain-fed agriculture, irrigation should be enhanced and more dams constructed to cushion the country in times of drought.

She called for incentives such as tax waivers on water harvesting accessories, borehole drilling equipment, permits for drilling of boreholes and reduction of soil testing costs from Sh1,500 to Sh500 per sample to boost production.

The institute noted that there was no way Kenya could feed its population through rain-fed agriculture if it does not exempt raw materials for plastic tanks, adding that the manufacture and sale irrigation related accessories should be incentivised.

“There is need for the introduction of subsidies to farmers especially on inputs such as fertiliser and high yield seeds,” it added.